In December 1941, William W. Robinson and Gordon H. Brown founded a ski club at Northeastern University known as the Hus-Skiers. The Hus-Skiers’ first constitution and by-laws were written by Thorton S. Cody on January 15, 1942. They were approved that same day by co-presidents William Robinson and Gordon Brown. Over the years, the Hus-Skiers became more involved in other outdoor activities, and the club’s name was changed to the Northeastern University Hus-Skiers and Outing Club, or NUHOC for short. The goal of the club is to provide opportunities for Northeastern students, faculty, and alumni to take part in outdoor activities together. NUHOC is the largest undergraduate club on campus. NUHOC is also one of Northeastern’s oldest student organizations. There is a loosely organized Alumni Club for former NUHOCers as well. 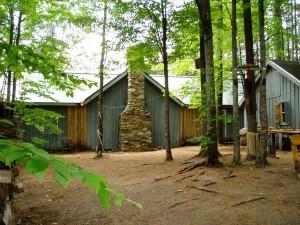 The Loj was built by some intrepid individuals who were looking to escape the city on a regular basis. In 1971, the members of NUHOC built a ski lodge in the White Mountains of New Hampshire using funds raised by students. The lodge was dubbed the Brown Memorial Lodge in memory of Gordon Brown, one of the club’s founders, who died in an aviation accident. The Brown Memorial Lodge, also known as the Loj, is located about 20 miles northeast of Mt. Washington. A contest was held among NUHOC members to select the design of the Loj, and a model of the winning design still resides in the NUHOC office.

The Loj is maintained by the Loj Committee and all the members of NUHOC. You may be wondering why we spell Loj with a “j” at the end. We do that because we like to, and you should do it too. The “j” distinguishes our Loj from any other boring lodge that may exist anywhere else. It’s our home away from home.